Autonomous vehicles are not only more convenient for passengers, but they are also more efficient in resource consumption. These AI controlled vehicles are able to calculate ideal speeds and the most efficient way to get from point A to B. Such efficiency allows autonomous vehicles to benefit our environment. In fact, the Intelligent Transportation Society of America published a report stating that autonomous vehicles can bring about a 2-4% reduction in oil and greenhouse gas emissions per year for the next 10 years (Pyper). Climate change can be further tackled with electric self-driving cars as well, as it would reduce emissions while also cutting down on energy usage due to the AI’s ability to maintain optimal driving settings.

There is research being conducted at Columbia University to use AI to deal with natural disasters. The research group is using AI to understand how intense storms caused by climate change are affecting forests. As storms, which are becoming increasingly intense due to the effects of climate change, continue to wipe out forests, the researchers are trying to discover how these trees grow back. Potentially, less carbon will be stored by the trees that grow back, contributing back to the cycle of climate change (“Artificial Intelligence-A Game Changer for Climate Change and the Environment.”). AI is being used to detect whether or not such trends hold true, in essence helping us discover the foundational problems contributing to climate change.

Our soil is becoming increasingly degraded by continuous farming, toxicants like pesticides, and pollution. Without conserving our land, our ever expanding agricultural system will become unsustainable. AI can be used to alleviate this issue. Through collecting data on the state of soil using robots, insights can be generated that help us know when to plant, maintain, and harvest crops (Creative). Information like this can reduce the amount of pesticides used by helping farmers grow plants more efficiently. This same monitoring technology can be used to protect endangered species or environments by surveilling those regions and predicting potential threats.

The great pacific garbage patch is already being slowly dismantled by an AI garbage collector. In the future, as the robotics and software behind this kind of garbage collector increases, it can be expected that this technology increases in quantity and efficiency. Using AI to tackle problems like ocean pollution is a very viable option; it would be an adaptable solution and one that could well outperform humans in boats. Using AI to clean our oceans can also help “researchers understand the human actions and subsequent changing conditions that harm the oceans, such as coral bleaching, illegal fishing, disease outbreak, and industrial activity” (Creative). Machine learning algorithms can detect trends behind why pollutants are coming into play, allowing for people to tackle the issue of ocean pollution at its roots. 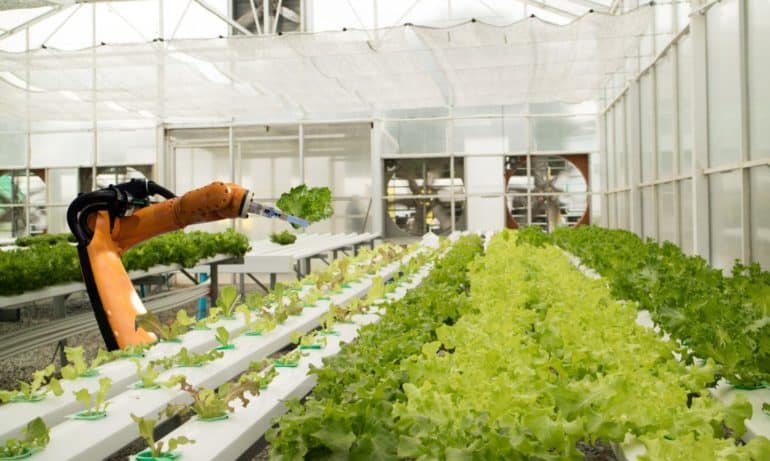 According to the Food and Agriculture of the United Nations, by 2050, there will be an additional 2.3 billion people living on Earth, also meaning that a 70% increase in agricultural yield will be needed to feed the growing population (“2050: A Third More Mouths to Feed”). Better planting practices can be made with AI insights, which help farmers grow their crops in an efficient, resource-conscious manner. Perhaps certain crops are ready to harvest, yet they human laborers don’t catch the batch by eye. That crop would be taking up land, water, and labor when it could already be harvested. Human farm laborers are also becoming more sparse, which adds to the issue of a growing population that will depend on more agriculture. Robot farmers can make the whole process more eco-friendly, while also filling in for the lack of labor in the demanding industry.

Smart home technology is capable of conserving a considerable amount of energy. Using AI, such technology is able to monitor conditions within one’s home and figure out the areas where energy is wasted, and where usage can be cut down. Currently, this technology is expensive and inaccessible to many. If smart home tech is able to spread into the masses and reach an affordable pricing point, each household will be able to conserve energy (and money) through AI regulated heating and cooling, smart lighting, and smart plugs. As a collective effort, much wasted energy can be conserved with this technology.

Smart monitoring technology can also be applied to companies to better manage their energy intensive data centers. Google is already utilizing its DeepMind AI platform to conserve energy used by servers in data centers (DW). Massive data centers use an immense amount of energy to run optimally; much of that energy is wasted as a result of inefficient cooling systems that run too often and don’t cool the hardware as well as they should. Google’s use of AI in this field has proven to be very effective: “The program cut around 40 percent of energy used for cooling and around 15 percent in overall energy use, according to its own report in 2016.” (Deutsche Welle).